Salvador on Brazil's north-eastern coast was the first capital of Portugal's new colony in the sixteenth century, until it surrendered that privilege to Rio de Janeiro in 1763 (it wasn't until 1960 that the plans to build a new capital in the centre of the country, Brasilia, came to fruition). But if this was once the entry point for European culture (and guns, germs and steel) into Brazil, today it is Salvador's African heritage, a product of three hundred years as a major slave port, that gives the city its distinctive flavour.

In particular, Salvador has developed a fusion of African, European and indigenous south American music known as Bahai (also the name of the region of which Salvador is the major city). While samba is the king of Rio's carnival, here Bahai dominates, spawning several world famous musicians from Gilberto Gil of the Tropacalia movement, to Caetano Veloso.

While markontour, like most foreigners, thought that carnival was Rio, it turns out that Salvador puts on a street party to rival its more famous neighbour, although without the emphasis on the formal competition between carnival schools.

Thirty-six hours here was not nearly enough to get to know Salvador, but it was plenty of time to realise that I want to come back here very soon!

A lively triangular square that gently fills up with people of an evening in the French style. Make sure to enjoy the local fast food, including a 'Romeo and Juliet' tapioca pancake (a delicious combination of coconut, mango jam and a bit of cheese). 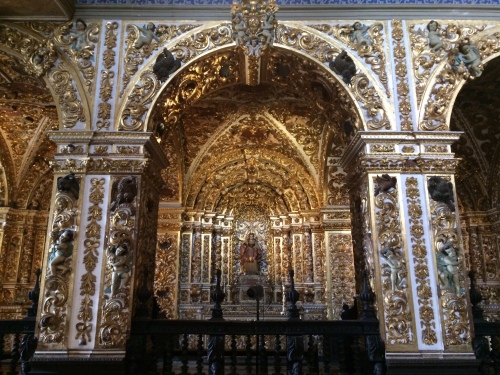 The old town of Salvador is awash with places of worship, a product of wealthy Portuguese seeking to show off their power, but this church is particularly grandiose and features and interior entirely painted in gold. It is visually stunning, if grotesque in places, particularly the bizarre churubs with their tiny baby bodies supported adult sized heads.

While coastal, the old town of Salvador was built not by the sea but high up on the cliffs as a protection against marauding pirates (of which I suspect many were actually English state-sponsored privateers). The modern legacy of this decision is the landmark lift of Salvador (pictured at the top of the page), which connects the old town to the port below. To markontour's eye the lift is something of brutalist beauty, but it is a shame they didn't put windows in.

I'm not normally one for visiting the dead, but this small cemetery for mostly early British colonists is perched on a cliff-top with fabulous views, and I did discover a possible relative – Margarit Ellen Watt, born 1843 and passed away in Salvador on 21 March 1915.

If I knew anything about architecture I would knock out a 'City Hall's of the World' blog, because I am racking up a fair amount of visits to such structures. But even in a list of the fifty or so that I reckon whose threshold I reckon I have crossed, Salvador would stand out as a modernist anomaly. Constructed on stilts, it is a low, rectangular block of glass, with marvellous views of the sea and a profile that is more common to airports than civic squares. I liked it!

One Response to “Salvador, Brazil”