Yesterday morning I was out with the dawn in order to catch the sun rising over the snow covered hills that surround our new Welsh home. At the peak of Mynydd Langorse a couple of hours later I met a man called Steve, who had fulfilled a thirty-year ambition to move here after first becoming enchanted with these Welsh hills after spending time in the valleys in 1984 as part of Lesbian and Gays Support the Miners (an uplifting experience that was so brilliantly portrayed in the film ‘Pride‘).

Like seemingly everyone around here, Steve had time to chat about the hills and the best walks, at least until the wind chill reminded us that one can only stay warm on these exposed peaks in winter if you keep moving. By the time I started my descent to second breakfast I had gained intelligence on the best spot to watch the summer sunset, as well as having confirmed that the lump on the eastern horizon was indeed Pen y Gadair Fawr.

To the west the sun was shining on the spurs of the Beacons as they taper down towards Brecon, with the flat side of Pen y Fan changing shade as wispy clouds scuttled across a blue sky. It was about as perfect a winter morning as it is possible to get and its memory maintains a smile even as I write this in the Heathrow departure lounge, trying not contemplate a day locked in a tin can flying to New York.

What follows – a route description for my circular walk from Bwlch up Mynydd Llangorse and back – is probably not going to make for a great blog. Its purpose, like much of markontour, is to serve as a memory bank for me and reference point for when I want to make recommendations to friends. But if you are ever in the Breacon Beacons and fancy an easy morning walk with stunning views, then I can recommend this one..

Duration: 3 and a half hours with time to enjoy the views

Saving a pint of Butty Bach in the New Inn for when you deserve it later, head down the hill on the pavement alongside the A40 in the direction of Brecon, passing the Gate Shop with its adjacent American Diner and the Village Hall. At the end of the rows of houses (GR:144 225) turn right and follow the marked footpath across some farmers’ fields for about half a mile. When you pass the large barn look our for the yellow way-markers that point you to a narrow path between two hedges. This emerges on to a narrow B-road (114 229). Turn right and follow the road for fifty metres until you come to a yellow house, where there is a track to your left (145 230). Take this and then enter the field on your right via a gate just after the stream. Head straight across the field with the line of the neighbour’s garden to your right, heading upwards to the B4560 (146 233).

Cross the road and up the track through Heol Las Farm, passing a courtyard barn-development on your left and the farmer’s house on your right. You’ll probably meet a friendly old collie called Buffy, who demands a tickle as a tax for passing the gate. Continue up the steep-ish stone path (see below), which for the last few weeks has been home to a family of Blue Tits and some noisy Robins, until you come to a gate (151 237).

Ignore the right turn and keep straight ahead, with lovely views of Llangorse Lake now opening up to your left and, if you angle further round, you’ll also spot Pen y Fan in the far distance. Follow the clear path through this field and the next, at which point pass through a gate (155 238) and continue to gently climb with a newly planted wood of oak, hazel and birch to your right.

When a wide path presents itself to your right (156 238) take this steeper route east until you come to a gate in a stone wall (158 237) and are presented with gorgeous views of the lump of Pen y Gadiar Fawr, Mynnd Troed and beyond. After a proper pause, turn left and follow the line of the wall, which then turns into a fence, north for a kilometre (ie one square on your map).

By this point (159 250) you will have climbed steadily and will be able to see the peak of Mynnd Llangorse and the clear paths to its peak. For a shorter walk, take one of these, but if you want an extra hour of glorious views of Lake Llangorse and Pen y Fan, turn over your map if you’re using a Harvey Superwalker, and follow the the path west along the line of the woodland fence for about three quarters of a kilometre. This route will take you around the western base of Mynydd Llangorse before marching up to its peak.

The path then bends to the north (153 250), now heading fairly steeply downhill through woodland. When the path forks, keep going straight ahead for another kilometre, all the while with uninterrupted views of Lake Llangorse. 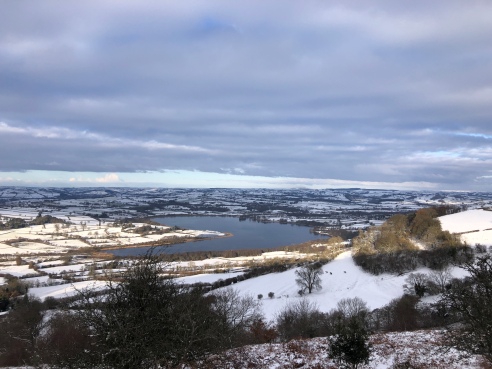 Presently you will pass a farm house with an assortment of Land Rovers in its adjacent field. Keep this to your left and follow the signs through the fields and down into the woods, passing through a gate announcing that the Treholford is logging in this area.

After a short while you’ll need to cross a forest path, with deep ruts made by the logging vehicles, but continuing great views of the lake below. Exit the woods through a gate and start to climb gently to another gate, after which you enter another small wooded area. Exit through another gate and start looking out for the sharp switch-back path at the base of a large tree, where there is a double fence to your right and another fence to your left (157 274). 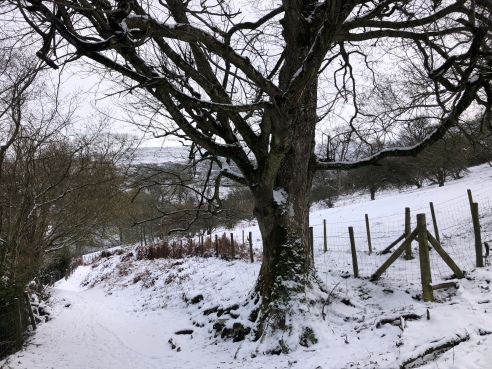 This path at first appears to double back on your route, but ultimately will take you steeply up to Mynydd Llangorse’s peak. All the way there are glorious views of Pen y Fan and half-way up, looking over the lake, you can see the Beacons sloping down into the relative flat of the Usk’s riverbed.

I think I might have lost the path a little in the snow today, but it was very clear when we walked it a few weeks ago, and if you just keep going to the nearest field wall heading south then you can follow that up to the peak. There’s certainly no missing the summit, upon which sits a Welsh red dragon astride a white trig point.

After enjoying the panoramic views, it is easy to spot the rout back down, heading south, or a right turn from the way you came up. When multiple paths become visible at the base of the peak, keep straight ahead with the fence on your right, re-tracing your steps from earlier in the walk.

This time, however, when you get to the gate where you turned left to head up Mynydd Llangorse (158 237), instead carry on following the path all the way down towards Bwlch. If you keep by the wall/fence of the farmer’s fields to your right you can’t go wrong, and you will enjoy lovely views throughout the descent. Finally the path comes out by a house (150 223) and the track takes you down to a road. Turn right and walk for a few hundred metres until it joins the A40. Turn left and you will see the welcoming lights of the New Inn.

One Response to “Sunshine on Mynydd Llangorse”