For something like the last five Christmases my main present to my partner, Liz, has been a trip to the Farne Islands to see the puffins during breeding season. 2014 is the first year in which we actually made it, but it was worth the wait.

The Farne Islands are basically little dots of rock off the Northumberland coast. Over the last ten thousand years the only people foolhardy enough to try and live there have been monks and lighthouse keepers. The most famous of the latter, Grace Darling, is remembered for rowing out in a storm to save shipwrecked sailors back when women engaging in 'mens work', let alone such acts of extreme physical bravery, were thought unusual. Sadly we also learned that she had the tremendous misfortune to die young from tuberculosis, despite living in a small tower 5 miles out to sea where she might have thought contagious diseases could be safely avoided.

While the Farnes may not be fit for human habitation and, indeed, have also been shunned by most other animals, this lack of predators makes them a great home for sea birds including terns, shags, guillemots and, of course, the friendly puffin.

Or at least the Farne Islands were a puffin paradise until, as Martin – our fantastic guide and owner of Northern Experience Wildlife Tours – explained, the gulls moved into to set up an extortion racket.

What happened is this: puffins are excellent fishers despite (or for all I know, because of) their funny cheese-triangle shaped beak, and each foray into the sea from their island burrow seems to result in a mouth full of sand eels. The gulls, who are obviously lazy sods, have cottoned on to this and now loiter on puffin high street, waiting to take a cut of whatever booty the brave little black, white and bright orange birds bring home.

Apparently this only started happening about six years ago, so either the gulls' previous source of food has dried up, or one of their number just made a notch up the evolutionary rung by figuring out this new route to free grub.

The birds' other problem is the hoards of tourists like me who descend on the Farne Islands each day from May to July. Actually, the puffins themselves seemed quite happy to be the star attraction for a bunch of binocular and camera wielding humans. The neighbouring terns on the other hand, show their extreme displeasure by dive-bombing twitchers as they step off boats and take chunks out of the scalps of any baldies who ignore the warnings to wear protective head-gear (I, of course, needed no encouragement to don a suitable hat and escaped with shiny pate intact).

The guillemots meanwhile (who, as John Hegley correctly sang, eat krill a lot), seem oblivious to anything other than protecting their eggs, which are oval shaped so as to prevent them rolling off the precipices upon which they make their nests.

This tactic seemed to work and, having tired of waiting for a mother guillemot to wriggle enough to set an egg off rolling, my gaze was drawn to the looming Bamburgh Castle, which dominates the coast-side view from the Farne Islands. 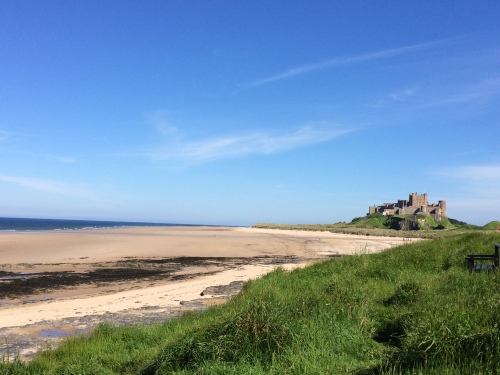 We stayed in the Lord Crewe Arms, a friendly guesthouse in the castle's shadow, and so this northern fortress has been an ever-present part of our weekend. From the outside it is clear that the castle has been much modified over the years, and inside we learned that much of the present structure dates from the changes made when the inventor and arms manufacturer, Lord Armstrong, bought and renovated the building at the turn of the nineteenth century.

The castle is still partially occupied, but is now open to the public and houses an interesting little museum dedicated to Lord Armstrong's life, along with bits of World War Two planes that mostly seemed to have crashed in Nothumberland as a result of training collisions. There's also a tea-shop, gallery and a nice tour of a few of the grander castle rooms, which includes the chance to play an intriguing Viking board game called Halatafl. It was fun to look around while we dodged the rain, but mostly the art collection is evidence that money doesn't necessarily buy taste.

Outside the castle walls, Bamburgh is a lovely little village, with access to miles of white sandy beach, a cracking sea-food restaurant, the Mizen Head (book in advance to get a table at the weekend), three decent pubs, the Grace Darling Museum, and well-stocked farm food shop (which also sells the Guardian to visiting big city liberals). Oh, and Liz asks me to point out that for some infathomable reason Bamburgh also boasts a sort of garden centre.

We survived very happily in Bamburgh for 3 days without a car, as everything we needed was in walking distance, and the cheery proprietor of Big Yellow Taxis was on hand to ferry us to and from Alnmouth station on arrival and departure. Although I should note that we wouldn't have managed to spend a wonderful hour watching a sixteen-strong pod of bottle-nosed dolphins off the coast of Newbiggin had not Martin been ferrying us around, and one of the Northern Experience Irregulars passed on a tip-off that they were happily tucking into a shoal of mackerel.

All in all, Bamburgh and the Farne Islands get a big tick and, on the basis of sticking with a winning formula, I think Liz already knows what she is getting for Xmas next year!