On the top floor of a Tudor hunting lodge at the edge of Epping Forest, something both strange and enlightening happened this weekend. “On All Hallows Eve, when the veil between the living and dead is at its thinnest” Becoming the Forest, and installation by Norwegian artist, Una Hamilton Helle, invited visitors to “take part in an audio journey celebrating the oncoming winter, populated by the voices of forest dwellers past and present, including the trees themselves.”

It proved a magical experience. For forty-five minutes on the top floor of Queen Elizabeth’s Hunting Lodge I was held in rapt attention, staring out on to ancient trees, some of their boughs grotesquely shaped by centuries of lopping, while a swirling audio loop evoked the spirit, language and life of the forest all around.

Inside, a kind of teepee branch shrine dominated the space, enclosed by four black hanging banners bearing strange white symbols. These turned out to be part of an alphabet used by ancient British Celts, called ‘Ogham’, each letter of which served a dual function as the depiction of a species of tree. Formed of a simple vertical stem and between one and five horizontal lines, the letters could be made using an arm and the fingers of a second hand. I love that the Yew tree (below), capable of living for thousands of years, commands the symbol that utilises all five digits. 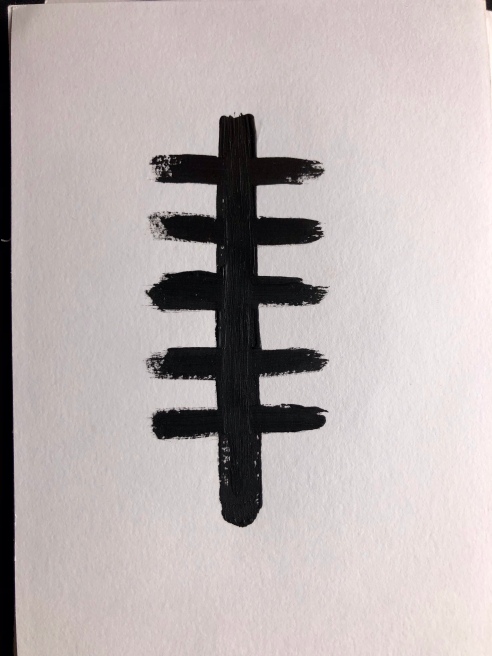 Una Hamilton Helle had produced beautiful pen and ink drawings, with the characteristics of each tree explained on the reverse, which visitors could browse through. Thus, I now know that an oak stands for “endurance” and “inner strength”, while the birch is all about “new beginnings”, hazel “deep listening” and broom “cleaning up” (obviously).

Upstairs, the sound-track tripped through readings of Luke Turner’s book Out of the Woods; foresters discussing the peculiarities of working among tree communities, where vision, our most powerful sense in the human world, is a less reliable guide, and touch, smell and hearing come to the fore; snippets of Algernon Blackwood’s 1912 story The Man Whom The Trees Loved, and the amplified sound of the forest itself – boughs creaking, brittle leaves crackling under paw and claw. While downstairs, the Chingford Ladies Inspirational Choir sang Ogham chants. Emerging outdoors into the Sunday sunshine, this forest that I have visited so often in the last twenty years felt altogether different, and myself more part of it.

Becoming The Forest has been produced as part of Waltham Forest’s year as the Mayor of London’s ‘Borough of Culture’. They made my weekend. Thank you public sector, thank you natural world, thank you creative human beings.

One Response to “Becoming the Forest”